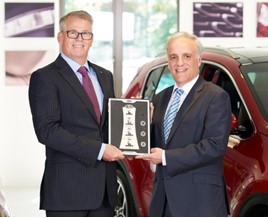 Kia Motors UK has appointed a new aftersales director after Hamish McCowan brought an end to 23 years with the business by announcing his retirement.

McCowan brings an end to a gruelling daily four-hour round-commute to the office and will make way for national aftersales manager Chris Lear to take the helm.

McCowan said: “I am exceptionally proud to be leaving the aftersales department in such great shape after a record-breaking start to 2018.

“The growth that Kia has achieved in the UK over recent years has been extraordinary and I am delighted to have been a part of it and the Kia family.

“I wish everyone at Kia the greatest success for the future.”

Over 40 years in the motor industry McCowan worked in a number of roles at Saab, Toyota, Volvo, Porsche and Mazda.

When he first joined Kia in 2000, McCowan started in the role of regional business manager and was promoted to the post of aftersales three years later.

A statement issued by Kia said that McCowan had succeeded in creating “a huge legacy of achievements” during his time within the business and had continuously exceeded targets and achieved new sales records.

Paul Philpott, president and chief executive of Kia Motors UK, said: “Hamish has been a central and vital part of the tremendous partnership we have built with our dealer network.

“His experience and professionalism are unrivalled in this industry and we shall miss him in so many ways.”

Chris Lear will move into the aftersales director role following 11 years in post as national aftersales manager. He said: “It is an absolute privilege to be taking over from Hamish who has superbly guided the aftersales’ growth of Kia in the UK for the last 15 years.

“I look forward to continuing to build on the great work already done, working collaboratively with our dealer partners to fully support their business success and in turn that of Kia.”

AM Poll
What is your take on the car retail sector's ongoing vehicle supply shortages? Please leave a comment
Vote
View all
3432