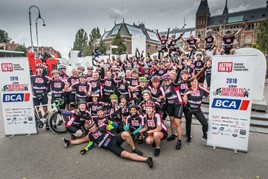 A team of intrepid fund-raisers from BCA has celebrated the successful completion of a 245-mile cycle challenge to Amsterdam’s Royal Palace, raising an estimated £100,000 for Action for A-T charity.

Despite riding into the teeth of Storm Ali, the sixty strong team of riders and support crew successfully completed the 2018 BCA Cycle Challenge on schedule for ‘Action for A-T’, a charity for A-T or Ataxia Telangiectasia, a rare genetic degenerative childhood disease.

BCA’s chief commercial officer, Craig Purvey, said: “It was an amazing event and everyone who participated would like to thank all the sponsors and supporters who helped to make the 2018 BCA Cycle Challenge possible.

"At this time, we remain on track to raise around £100,000 for Action for A-T, the charity funding medical research into Ataxia Telangiectasia, a rare, genetic degenerative childhood disease.”

The team of cyclists from BCA and the wider motor industry were joined by BBC news presenter and well-known cycling enthusiast Naga Munchetty, who tweeted the progress.

The team left BCA Bedford on the morning of September 20, arriving at the Royal Palace, Amsterdam two days later.

Action for A-T’s chief executive, who also completed the BCA Cycle Challenge, Sean Kelly, said: “We would like to thank BCA, their customers and all the sponsors for supporting Action for A-T and the families who look to us for hope for the second year running.

“It appears we are on track to raise a record amount from this year’s BCA Challenge in support of Action for A-T and those funds will be put to very good use in supporting research into identifying a cure for this devastating childhood condition.”

A team of more experienced cyclists successfully tackled the Alpe D’Huez route that is used in the Tour de France, also raising funds for Action for A-T.

The charity has invested more than £1,700,000 in a variety of A-T related research projects around the world.  A-T affects multiple systems of the human body, and health progressively deteriorates causing an overall loss of coordination and muscle control.

Children are usually confined to a wheelchair by around the age of 10 and will need assistance with everyday tasks.

AM Poll
Are video appointments a better use of sales executives' time than face to face appointments? Please leave a comment.
Vote
View all
2337