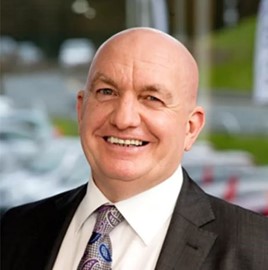 Chorley Group chairman Andrew Turner received his MBE from Prince William, the Duke of Cambridge, at an official presentation event at Buckingham Palace this week.

Turner, who was recognised in the in the Queen’s Birthday Honours for services to the local community, completed a trek to Mount Everest Base Camp only last month in a fund-raising bid that raised £59,000 for the Inspire Youth Zone Chorley children’s charity.

But the 59-year-old swapped the well-worn walking attire from his 14-day Himalayan trek for a three-piece suit as he came face-t-face-with Royalty this week.

Chorley Group took to social media to mark the special moment and pay tribute to the business’s founder.

“A very proud moment for everyone at Chorley Group as our Chairman Andrew J Turner MBE was awarded his MBE for services to the community of Chorley, including his business services & charity work with Inspire, Chorley Youth Zone & Chorley Mencap,” a message from the group stated.

“From everyone at Chorley Group we would like to congratulate Andrew on this very well deserved recognition for all his tireless hard work.”

Turner was joined at Buckingham palace by his partner Dawn, his son Adam and his eldest grandson, Addison.

The founder of the £130m turnover multiple UK Best Dealerships to Work For awards winning group is the founding chairman of the ‘Inspire’ Chorley Youth Zone and has taken a lead role in securing more than £2.5m of investment to guarantee its long term success.

Talking to Lancashire Business View about his MBE award earlier this year, Turner said: “I am truly humbled to receive this honour — it really should be shared with all the people who have worked alongside me over the years at both Chorley Group and the Inspire Youth Zone.

"Their passion and hard work are the things that drive me on.”

AM Live 2019: Best UK Dealerships To Work For winners revealed

AM Live 2019: Best UK Dealerships To Work For winners revealed