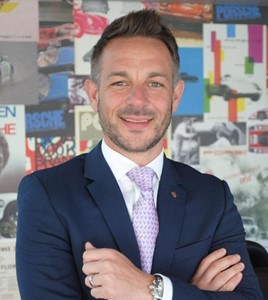 The move was completed on February 1 when the former centre principal at Porsche Centre Guildford, who joined Porsche Retail Group in 2015, officially took up his new post.

Flint started his career with Ford Retail before moving to Lookers as general manager of its Jaguar Land Rover dealership at Park Royal, London, and moving on to become Hardwoods Group’s Audi UK head of business.

Now he is looking forward to the next challenge of his career, according to a statement issued by Porsche Retail Group.

Flint said: “The culture of trust and autonomy that we have here at Guildford is the driver for all these successes and great staff and customer interactions, and I’m looking forward to continuing this approach within a group environment.”

Porsche Retail Group’s statement, issued via LinkedIn, said that Flint was the “highest profile” appointment of Porsche Retail Group’s “promote from within” strategy, an approach which has seen a number of senior management roles now filled by those who have progressed through the organisation.

The business said that Flint had since overseen growth and improvement across every business KPI, culminating in Porsche Centre Guildford achieving record profitability in 2019, the number one new car sales and registration volume Centre in the Porsche GB network and an outstanding employee satisfaction score.

In 2020 Porsche Retail Group will welcome the new Taycan electric vehicle (EV) to its showroom line-up.

Listers opened a new facility in Hull last month – its first dealership with the German sports car brand – and Pendragon is set to open its new Stockport facility ahead of plans to create an all-new dealership on the outskirts of Nottingham.

Work is also underway to create another new Porsche Centre, in Norwich, which will be operated by Graham Dacre’s Lind Group.