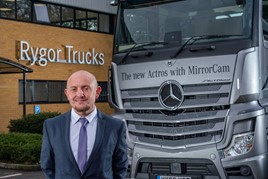 Having started his career as an apprentice technician more than 15 years ago, Joyce has worked his way up through the company’s service department to his current role.

Paul Reed, Rygor owner director, said: “Anyone who has had the pleasure of working with Sean will know that he is a fantastic leader in this business and constantly does everything he can to support our customers, his colleagues and team members. He is admired by the Mercedes-Benz network, as well as his peers and team, having repeatedly been awarded the accolade of ‘Service Manager of the Year’ at our internal Setting Standards awards.

“Over the years, Sean has managed some of the largest and most challenging sites in the group, as well as being instrumental in the successful opening of our new Heathrow Truck Centre last year. I know that he will be fantastic in his new role and look forward to working with him as a fellow Board member,” he added.

Joyce will be supported in his director role, by newly promoted group service operations manager, Luke Mason, who the business has also promoted from within, into this senior leadership position.

Joyce said: “I love working for the Rygor business and feel really honoured to now be in such a senior role. Rygor has always helped me develop and put its faith in me to succeed, and I am really looking forward to this next stage in my career. I have a great support system here in Paul and the rest of the service senior leadership team and know that, together, we will continue to Set Standards in the industry and inspire our team to succeed.” 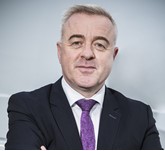