Gravells MD recognised for excellence in the automotive sector 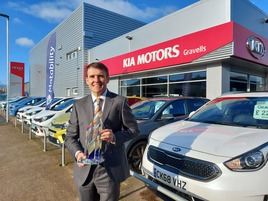 Gravells Group managing director Jonathan Gravell has been given the 2021 Terry Davis Automotive Award from the Welsh Motoring Writers.

The Welsh Kia dealership group MD was recognised for his “excellence” in the automotive sector.

He received the trophy at a special ceremony held at Gravells Kia Hereford – the first Gravells dealership to open outside Wales.

The award recognises personal or corporate excellence in the automotive sector, and has been presented to many notable individuals since its founding in 2010.

It was renamed the Terry Davies Automotive Award in 2017, in memory of the highly-respected former chairman of Welsh Motoring Writers.

Simon Harris, chairman of the Welsh Motoring Writers, said: “Gravells has been a valuable partner for all the automotive brands it has represented in South Wales for many years, including Kia UK.

“Family businesses such as Gravells thrive on loyalty and word of mouth helping retain clients and reach new ones, and this can only be done through excellent customer service. This is at the heart of how Jonathan Gravell runs the business.

“The fact that Gravells recently gained a foothold across the border in England with Kia, although remarkable, should be no surprise.

“Jonathan is a very worthy recipient of the 2021 Terry Davies Automotive Award.”

Gravells has a long history in Wales, dating back to 1932, with its first Kia dealership opening its doors to customers in 2007.

Today, it operates six Kia dealerships, which are frequently awarded for their customer service, for example with the Kidwelly site becoming one of the first ever dealerships to be accredited with the ‘ServiceMark with Distinction’ by the Institute of Customer Service (ICS) – the highest level of accreditation awarded by The Institute and only held by 14 organisations in the UK.

The Abergavenny and Narberth dealerships were awarded the 800 Award by Reputation for their outstanding customer service across a broad spectrum of criteria. Gravells also recieved the 2019 AM Award for Best Dealer Group (Up to 10 Sites).

Gravell said: “It’s a great pleasure and a delight to receive this award. All Gravells staff work tirelessly to put our customers front and centre of the business, so to achieve this award means a huge amount not only to me but to the entire Gravells family of dealerships.

"This award is especially humbling, following the unprecedented circumstances over the past couple of years. I thank all the Welsh Motoring Writers for this outstanding recognition.”