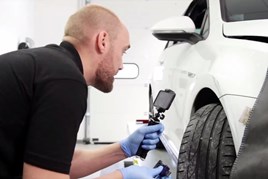 The growing role played by video technology will see sales executives and technicians replaced by presenters as part of ‘immeasurable’ changes by 2020, according to CitNOW.

A white paper study published by the showroom presentation specialist, claims that two-way communication utilising online video and live chat will become the number one tool for the automotive industry – at the expense of traditional roles.

The report, entitled “How video has changed the face of the automotive industry forever” states that the anticipated introduction of super-fast 5G mobile web connections will prompt “immeasurable changes” in the car-buying landscape by 2020.

CitNOW chief executive, Alistair Horsburgh, said: “At the moment, the industry is in its first phase where it is embracing the benefits of video as a revenue and profit driver. But, as video enters its second phase, the customer will be expecting a video rather than an impersonal email, text or letter, as video facilitates a two-way conversation.

“Video will be integrated into every customer touch point. Its convenience and transparency will see the best dealers and manufacturers dramatically improve their customer retention figures. It will become a core pillar of an OEM's CSI strategy; a driver of a brand’s marketing strategy.

“Driven by the consumer, video will have made the motor industry unrecognisable in the next five years.”

CitNOW claimed that 86% of the dealers it interviewed to create the White Paper said that video had positively impacted on customer retention and had also resulted in 88% of used car sales and 70% of new car sales being completed within four weeks.

The business counts 28 major car makers and 88 of the top 100 UK dealer groups as its clients.

Among the future changes prompted by the increase in popularity of video in car sales will be an end-to-end adoption of the technology and even a restructure of the franchised dealer networks.

The White Paper said the a more video-dominated future in retail would see “the emergence of Virtual Used Car Sales Hubs, either controlled by OEMs or the bigger Dealer Groups, where consumers buy entirely remotely through video.

"The sites will not be open to the public and will have lower overhead costs by virtue of not requiring high traffic, high value retail sites.”

Those who fail to adapt to the changing environment – those with a “shyness” which can prove a stumbling block to adoption – will have to make way to a new kind of media-savvy employee.

“It all sounds a bit daunting,” said Horsburgh, “but it’s the way the whole industry is going. Consumers these days expect this level of convenience, speed and quality of service.”