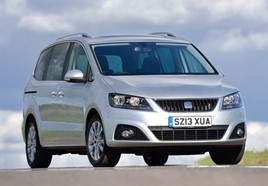 Seat’s Alhambra has grown its reputation as an in-demand MPV thanks to the results of sales data compiled in Auto Trader’s monthly fastest-selling cars rankings.

According to the online used car classified specialist, the Volkswagen Group’s Spanish brand topped the speedy stock turn stakes once again during the period to September 16, with the seven seat people carrier taking an average of just 23 days to leave car dealer’s forecourts in diesel, automatic guise.

Auto Trader claimed that MPVs and 4x4s have the potential to sell faster than their smaller counterparts as the start of a new school year brought thoughts of seven-seat transport to the fore for car buyers.

As a result, the Alhambra was joined in the top three by the Volkswagen Sharan, with the 2017 and 2016 models ranked second and third.

Auto Trader’s director of commercial products, Karolina Edwards-Smajda, said: “Due to a growing array of exceptional macro-economic influences, the market is constantly shifting – supply, demand and price are all changing by the day.

“We strongly believe that to succeed within this challenging environment retailers need to be agile and able to adapt their forecourt strategy quickly.

“Data intelligence is key to this. Complementing their own years of experience, data can inform every aspect of the sales process to ensure they’re stocking the right cars for the right price, helping to speed up the days to turn and increasing profits in the process.”

Auto Trader also divided out its fastest-selling rankings in terms of fuel type during the latest publication of its monthly findings.

The 2015 Dacia Sandero Stepway (manual) took the petrol top spot, with a potential turn time of 30 days, whilst the 2016 Seat Alhambra (2016 automatic, 24 days) came up trumps for diesel.

In-line with its current national ranking and following its national success last month (ranked third and fourth), the accessible 2015 Renault Zoe (automatic) retains its title as the fastest selling electric vehicle (EV) with a potential to sell in just 26 days.

Despite diesel’s national dominance, seven of the 12 regions and countries tracked by the Index reported a petrol as the fastest selling car.

A range of nearly-new vehicles were among the used car retail sectors slowest selling vehicles.

The e-Golf topped a list of 2019-plate stock which may be losing out as it competes with appealing finance offers on new cars.