The UK's used car market contracted by 8.3% in the first quarter of 2020 following a COVID-19 coronavirus lockdown-prompted 30.7% decline in March sales, SMMT data has revealed.

The Society of Motor Manufacturers (SMMT) said that “solid growth” experienced by the sector’s car retailers during January and February was “wiped out” by the steep March decline as the Government’s lockdown of non-essential retail businesses cut the month short.

A total of 1.8 million transactions took place in Q1, according to the SMMT’s data – down from 2.02m in the same period a year earlier – following growth in January and February of 2.9% and 4%, respectively.

SMMT chief executive, Mike Hawes, suggested that Prime Minister Boris Johnson’s announcement on Sunday (May 10) that people starting to return to work should avoid public transport if possible, could prove a catalyst for the used car sector as lockdown measures are eased.

He said: “While it is tricky to predict future demand, the impact of social distancing requirements on public transport means that, for many people, the car will play an even more important role in helping them travel safely to work.

“Re-opening new and used car outlets will support this, enabling more of the latest, cleanest vehicles to filter through to second owners and help support the UK’s green growth agenda.”

In analysis of its March used car sales data, the SMMT said that demand for pre-owned plug-in electric vehicles (including hybrids) grew 13.6% in the first quarter as buyers took advantage of increased volumes of zero, and zero-emission capable, models appearing in the market. 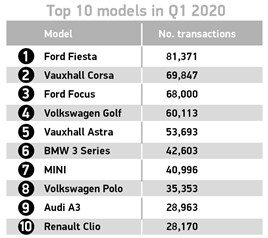 Superminis remained the most popular used buy, with 610,859 transactions, equating to 33% of the market but almost all segments saw a fall in demand, apart from ‘dual-purpose’, according to the SMMT’s data, which rose 2.7% with just over a quarter of a million finding new owners.

The only car colour to see a rise in demand was bronze, which saw an increase of 1.6%.

In a short comment on residual values in the sector, the SMMT said that “average used car residuals are holding firm” with prices in March down only 0.2% year-on-year at £13,601.

“Data also suggests that, despite lockdown measures being in effect, consumers are continuing to search and browse used cars online with many still looking to buy when the time is right,” it said.

This was a sentiment shared by Auto Trader’s commercial director, Ian Plummer, who was among the first to comment on the used car market data.

He said: “Although the majority of retailers’ businesses have been halted by the UK lockdown, our research indicates that the market is paused, not stopped, as many consumers are eager to buy their next car when they can.

“Research we conducted recently revealed that 84% weren’t expecting affordability issues, and only 2% said that they’ve been put off buying a car altogether.

“There are likely to be new areas of market opportunity too as more than half of commuters previously using public transport, and who have a driving licence, expect to buy a car for their commute post lockdown as they seek safety in their own personal space.

“Therefore, it’s is essential that retailers are poised to reopen their doors, with enhanced health and safety measures yes, but also with the right stock at the right price. Crucially, this does not mean slashing prices; maintaining prices in line with market valuations will help the used car industry recover together as one.”

Plummer added that retailers need to show consumers that they are adhering to the new social distancing guidelines as well as the health and safety measures to instil confidence that if they turn up to a forecourt when Government deems it safe to do so.

Used car and van markets ‘will bounce back’ post lockdown

Used car and van markets ‘will bounce back’ post lockdown