Infiniti has confirmed it will produce a hybrid vehicle as part of its M range of saloons. 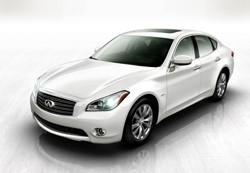 On sale in spring 2011, depending on market, the M35 Hybrid has an electric motor and twin clutch which will “optimise energy usage across the widest possible range of driving conditions” said Infiniti.

Details of driving range, performance and transmission are yet to be released but Infiniti said it was on target to beat its predecessors on fuel consumption and emissions.

New technology includes a laminated lithium-ion battery pack which is the same size as conventional batteries but offers twice the power.

The electric motor acts as both propulsion unit, boosting the V6 in power assist mode when maximum acceleration is required, and also as a generator. As well as charging the battery in the normal way, the motor recovers energy otherwise lost during deceleration and braking.

The M35 Hybrid can also run solely on its electric motor in certain driving conditions.