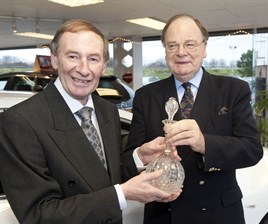 Peter Legge (62) is retiring from Macrae & Dick after spending 46 years of his career with the Scottish dealer group.

Legge was presented with a Victorian crystal decanter by Francis Hamilton, chairman of Macrae & Dick, at a ceremony attended by colleagues both past and present.

Hamilton said: “I am delighted that Peter has been with the company all these years and have found him a very honest, hardworking individual. I wish Peter all the best for the future and hope he enjoys his retirement.”

Legge started his career on the July 14, 1965 as a messenger boy with the Inverness Motor Company. He then progressed through the company qualifying as a mechanic and working his way up to general manager of the Macrae & Dick Rover dealership in Nairn in November 1985.

He said: “Being made general manager at only 35 was an achievement that I was very proud of.”

From Nairn Legge went on to be general manager of Macrae & Dick Rover in Stornoway before returning to Inverness and taking up the post of aftersales manager at the Mazda dealership.

Legge is one of eight employees with over 40 year’s service with the group.

Legge said: “I have really enjoyed my time working for Macrae & Dick as they are the type of company who really look after their people.”

Established in 1878 Macrae & Dick is one of the longest established dealers in Scotland.

With dealerships in Inverness, Elgin, Perth and Stirling, Macrae & Dick employs over 450 people across Scotland. It represents Ford, Honda, Jaguar, Land Rover, Mazda and BMW and MINI (in Stirling, trading as Menzies).