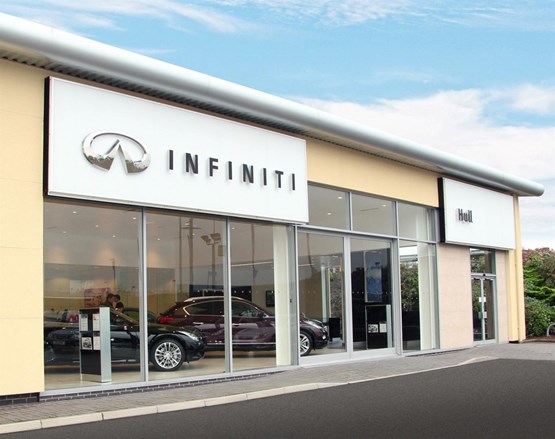 Infiniti entered into the UK with financial backing from the Lebanon with dealer groups Rymco and Mana Premier.

However, UK groups have started to invest in the brand with Vertu Motors recently anouncing it will add a site in Sunderland (close to where the new Q30 1-Series rival will be built).

The rate of growth for Infiniti has been much slower than expected, but

Oliver told AM that Infiniti will grow this year and had a good first two months of 2014. Infiniti sold 66 cars in January (312.5% up) and 16 in February. In February 2013 Infiniti sold zero cars, and Oliver said that would be the last time the brand would post a performance like that.

Oliver said: "The dealer roll out is gathering pace with new investors like Vertu, FG Barnes and Glyn Hopkin."

According to Oliver, UK dealer groups are now considering the brand and new product like the Q50 and its 2.2-litre diesel engine have helped. A new 2.0-litre turbo petrol engine will launch in the UK in the autumn this year which will help give more choice to customers.

The Q50 will help Infiniti chip away at the fleet market, with Infiniti's total fleet sales in January outstripping retail.

Oliver also believes 'the arrival of the Q30 will change the face of Infiniti forever' and start to unlock higher volumes for dealers in the UK.

Infiniti is still recruiting dealers in the UK and is ideally looking for solus locations, but has relaxed its view, with a certain amount of flexibility now with dealers sharing premises with a clear delineation between brands.

Oliver said: "With the volumes we are looking at profitability for the dealers is challenging.

"We don't have the parc for aftersales to help support the network yet, but the used car base is building now."

Oliver said that the higher volumes of competitor brands does mean Infiniti can spend more time with customers and hospitality is a key differentiator.

He said: "It's such a competitive market and we have to be in full conquest mode.

"We have to play to our strengths which is delivering a very personal experience."

Infiniti has eight showrooms in the UK with a ninth soon to launch in Norwich.

There are more dealerships due to launch in 2015, but the pace has been slower than the original plan of having 14 by 2015.

The south east is an area in particular which is under represented and it's a key market for a premium brand, with a customer base which has a higher average salary than anywhere else in the UK. The south east also has a high cost base which makes launching a large solus, low volume franchise difficult to justify.