The average UK car dealer finished the year strongly making a profit of £27,000 in December, an improvement of £5,000 over the prior year.

The return on sales percentage dropped slightly however, reflecting the fact that turnover has been increasing at a faster rate than profit, with dealers having to compromise on margins in order to hit required targets.

ASE chairman Mike Jones said: "Behind this record profitability was a split between different sectors of the industry with prestige car retailers having a superb year and producing an average return on sales of over 2.2%.

"The high-end luxury dealers on average lagged slightly behind this overall result in percentage terms with volume dealers producing a return of just over 1%."

Year-on-year, the statistics are now very similar across the board with the improved bottom line profitability a reflection of the increased volume of new and used cars, which rose 8.5% on 2013, he said.

"The improvement in aftersales, which can be seen through the growth in labour efficiency, has been outweighed by an increase in overheads resulting in a drop in overhead absorption.

"Given the growth in targets for most dealers in 2015, turnover will have to increase significantly to deliver the same level of overall profitability.

"This could see many dealers aggressively chasing targets and potentially getting into problems with self registered vehicles." 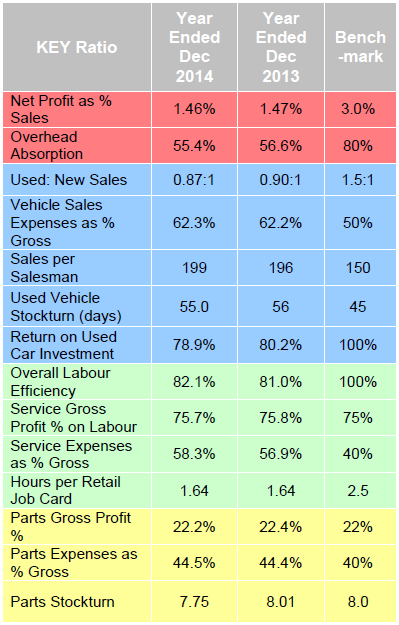