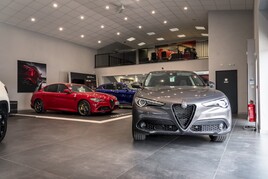 Read Motor Group has added its first Stellantis new car franchises to its portfolio with the acquisition of Alfa Romeo Retailer of the Year Beechdale Motor Group.

The acquisition of £29.9m turnover (2020) Beechdale, which is also a franchisee for Jeep and Hyundai Motor UK in Derby, is expected to take Grimsby-based Read’s annual turnover to almost £100m.

The acquisition is Read’s first since that of Burrows Motor Company’s Doncaster Hyundai franchise in April 2018.

Commenting on the move, Read Motor Group managing director, Mike Read, said: “Following the acquisition of Beechdale Motor Group we are delighted to welcome the Derby team to the Read family group.

“This further strengthens our very close partnership with Hyundai UK, and takes us on a new adventure with amazing brands, new to group, in Alfa Romeo and Jeep.”

Read Motor Group also represents Hyundai in Boston, Doncaster, Grimsby, Kings Lynn, Lincoln and Worksop, Suzuki in Grimsby and added an MG Motor UK franchise in Grimsby at the start of this year.

In February last year the group’s Grimsby Hyundai dealership was named Dealer of the Year by the Korean carmaker.

The group also claimed the Hyundai Customer Focus Dealer of the Year 2019 accolade with its franchise in Kings Lynn.

In Beechdale Motor Group Read adds another award-winning operation to its ranks.

Alfa Romeo named its Derby franchise as its top car dealer in a COVID-hit 2020 at its annual Retailer of the Year Awards.

As well as delivering Alfa Romeo’s highest volume of sales in 2020, the brand said that Beechdale climbed the rankings thanks to its “unwavering dedication on delivering an excellent customer experience, particularly in these challenging times”.