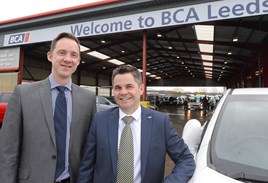 BCA has begun the rebranding of its former SMA centres with the official opening of its Leeds centre.

Official launch events are set take place for BCA in Kinross, Livingston and Wolverhampton over the coming weeks as the remarketing specialist continues its rebranding of the former SMA centres it acquired for £42 million last summer.

“The opening sales were absolutely buzzing and it was noticeable that buyers on BCA Live Online were exceptionally active, accounting for significantly higher online activity than the centre had experienced previously.”

He added “Congratulations to the team at BCA Leeds under manager Matt Gill who pulled out all the stops to ensure the official opening took place smoothly and so successfully.”

Sales are held Mondays to Friday, with general sales every day, Fleet sales on Tuesday and LCV sales on Thursday.