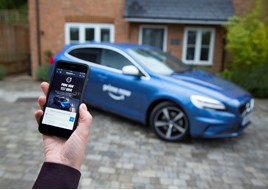 Volvo Car UK has teamed up with online retail specialist Amazon in a bid to drive convenient access to its vehicles with a ‘Prime Now test drives’ initiative.

The new partnership means that Amazon customers can book a test drive via the super-fast Prime Now UK delivery platform and have a Volvo V40 hatchback delivered to their door by a Volvo product specialist at the time of their choosing.

Initially being trialled with the V40 and for a limited time only, the partnership is available to customers living in four UK cities – London, Birmingham, Manchester and Edinburgh – on select weekends in June and July.

“We’re proud to team up with Amazon to deliver this unique initiative, the first of its kind in the UK and the latest in a range of offerings from Volvo designed to take the hassle out of running a car.”

The new Volvo partnership with Amazon echoes Mazda UK’s MyWay test drive concept, which was initially trialled within the M25 and initially saw 10 “brand champions”, similar in concept to product geniuses that are used by brands like BMW, Honda and Kia, deliver cars to customers for a test drive.

Running since July 2015, the MyWay programme could yet be rolled out to other areas of the UK, according to Mazda UK managing director Jeremy Thomson.

In a statement issued this week, Volvo revealed that customers keen to take advantage of its offering with Amazon will complete a sign-up process which “takes just a few minutes”.

A fully-trained operative will then bring the car straight to their door. Accompanied by the expert, who can explain all of the car’s functions, the customer can then put the V40 through its paces on roads familiar to them.

Should the customer be interested in a purchase following the test drive, they will be directed to their local Volvo retailer.

Mazda’s MyWay scheme attracted around 230 sales-generating leads in the two years after its 2015 launch, according to Thomson.

Prime Now test drive slots last for 45 minutes, and will be available over the following weekends: