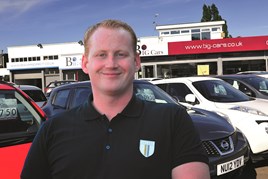 Big Cars owner Adam Stott has been recognised by Amazon and the Confederation of British Industry as being among the UK’s most successful entrepreneurs.

The 33-year-old, who set up his business from his mum’s house in 2008 - as AM found out when we paid Stott a vist last year - was one of eight entrepreneurs from across the country shortlisted for the 2016 Amazon Growing Business Awards and the only finalist from within the automotive sector.

In just eight years, former car salesman Stott has built his used car company from a one-man band to a 75-strong, £40 million turnover business, selling more than 3,000 cars annually from five sites in Essex, Surrey and soon to open dealership in Sudbury, Suffolk.

Stott said: “I’m very proud to have been included in such a distinguished list of entrepreneurs by such a well-known name in global enterprise.

“Big Cars is first and foremost a customer service business that happens to sell cars and it continues to go from strength to strength thanks to the hard work of all the team.

“It will be another record-breaking year for the company so this recognition is a really nice Christmas bonus. We expect 2017 to be even bigger.”

Big Cars’ innovative use of social media has played a key role in the business’ rapid growth.

It now has over 350,000 followers on Facebook, so far generating sales in excess of £50 million, according to Stott.

Stott is also developing a career as an international speaker, author and business coach, including recent engagements in South Africa and the USA.