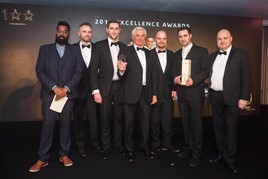 J & A Rigbye & Sons was named Citroën UK's retailer of the year as it scored an awards hat-trick and the brand hosted ‘The Party of the Century’ to celebrate its 100th anniversary.

J & A Rigbye & Sons managing director, John Rigby, said that he was “ecstatic” when the business scooped three awards on the night.

He said: “It is a huge honour. To know you’re nominated is recognition enough in many ways, but to walk away with the awards was something else.”

Citroën’s dealers are assessed on a number of KPIs over the course of each year and the best three performers in each region or category are shortlisted for an award.

In total, 32 awards were issued to the network’s operators on the night (February 21) which followed the theme of ‘The Party of the Century’ in recognition of Citroën's landmark anniversary.

Asked why J & A Rigbye & Sons proved such a success, Rigby told AM: “We’re a rare thing these days. We’re located in a small village and, truth told, if you have an accident here the chances are that it will be a Citroën that runs into you.

“The business was started in 1961 and we took on the Citroën franchise in 1989. Our customers are loyal and they just keep coming back because they know we’ll look after them. It’s down to the level of service we provide.”

The levels of service provided might have remained the same at the business, but Rigby said that the range of vehicles offered by the Citroën brand has changed beyond all recognition in recent times.

“It’s a great product range,” he said. “The C5 Aircross was launched earlier this year and already it’s been a runaway success.”

Rigbye took a party of seven to the annual Citroën dealer awards ceremony, which was hosted by comedian Romesh Ranganathan, with awards presented by the brand’s UK managing director, Karl Howkins.

J & A Rigbye & Sons guests on the night were: his nephew Richard, a technician; his sons Ian and David, service and sales managers; his niece, Michelle O’Rourke, who runs the sales office; and long-serving technician Phillip Dalton.

Rigbye said: “It’s a family-run concern. We’re a close team. I’ll be taking the full team out to celebrate with a meal somewhere too, but at the moment I’m still saving up for that one.”