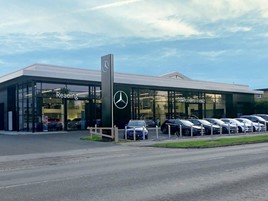 Vertu Motors has completed the £5 million expansion and refurbishment of its Mercedes-Benz dealership in Reading.

The AM100 franchised car retail group has extended the facility on Richfield Avenue, Reading, to accommodate 14 cars alongside the creation of a new service reception designed and refurbished to the latest Mercedes-Benz corporate identity (CI) standards.

Mark Gibbings, market area director, Vertu Mercedes-Benz said: “Vertu Motors has invested a huge amount of money in this project and it demonstrates a fantastic amount of confidence in our colleagues, the Reading area and our customers.

“The new dealership is one-stop shop for all of our customer’s needs and they can be assured they will receive the excellent customer service they are used to, in superb surroundings with fantastic facilities.”

The Vert Mercedes-Benz facility has also been upgraded to include a three-lane undercover vehicle drop-off area which allows customers to have a valet parking style ‘drive-thru’ experience when dropping off their cars for a service.

A new wash and valet facility, which includes a dedicated smart repair bay means, in addition to standard service, customers will be offered minor cosmetic repairs as part of the dealership service.

Extended customer parking and an enhanced used car display will open within the next couple of months, a statement issued by the group added.

Earlier this month Vertu Motors chief executive Robert Forrester suggested that the group would grow through the strong “pipeline of potential acquisition opportunities” in a trading update which revealed the business’ strong balance sheet.

Vertu reported a 2.7% decline in revenue in the five-month period to January 31 in the update published via the London Stock Exchange on March 3, despite a 5.4% rise in like-for-like aftersales revenues.

Forrester said: “Scale will become an increasingly important success factor as the sector evolves and the current pipeline of potential acquisition opportunities is strong, with our robust balance sheet only being deployed after rigorous capital allocation testing."

Vertu’s most recent acquisition was completed at the end of February, the group completing the £4 million purchase of the trade and assets of Vantage Motor Group’s multi-franchise dealership representing Honda and Kia in Bradford, West Yorkshire.