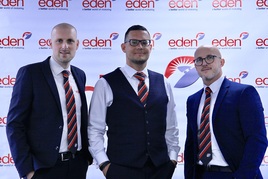 The Berkshire-based AM100 retail group’s new team of directors Matt Gill, Russell Catlow and Mike Earle have all received promotions over the past 12 months having progressed through its ranks after joining at an early age.

All three reached senior roles below the age of 40 in a show of career progress which the group said is proof that it “not only invests in its people, but also gives them the opportunities they need to thrive”.

At a time when the car retail sector is suffering what was described in a recent AM news insight as a “staffing crisis” many businesses are working hard to grow their appeal as employers to potential candidates.

Speaking to AM this week, Perrys Group managing director, Darren Ardron said: “Recruitment is one of the biggest challenges we face right now.

“Many long-standing employees have taken a step-back or retired after reassessing their lives due to COVID-19 and we’re having to work harder than ever to attract new people into the sector.”

This week AM reported how Vertu Motors had launched a new apprenticeship drive as it attempted to fill 120 vacant customer service roles.

Bowker Motor Group, meanwhile, has teamed-up with Preston College in a partnership aiming to attract and train the next generation of automotive technicians.

Car retailers across the UK are now being urged to recognise the sucess of their employees and workforce development efforts at the AM Awards 2022.

Categories including Dealer Principal/General Manager of the Year and Leader in Diversity and Inclusion could prove key to boosting business' apeal to potential recruits.

The AM Awards 2021 Dealer Principal/General Manager of the Year, Arbury Motor Group director, Scott Stenning, told AM that his win, last November, served to “raise the profile of the group” and show it in a positive light among potential new recruits.

Eden hopes that its staff success stories will prove inspirational to those considering a role in the sector, meanwhile.

New operations director Matt Gill was appointed to his role in the summer having begun his career as a sales executive at Eden Reading.

He went on to become general manager at four of the group’s Vauxhall sites before becoming a regional manager in the Thames Valley.

He said: “The company’s leadership development programme has really opened doors for me. It’s the culture that makes the difference – we’re treated equally and encouraged to thrive.”

Catlow joined Eden as a sales executive in Taunton in February 2016, going on to be branch manager in Torquay before taking on a regional manager position in the South West in 2018.

“Opportunities exist for everyone and the company’s culture rewards those who are prepared to work hard and look after each other and our customers,” he said.

Earle took up his operations director role having joined Eden in 2012 as a sales manager at Eden Vauxhall in Fareham.

Prior to his current position, Mike was a regional manager overseeing sites in Oxfordshire and Berkshire, as well as holding a core role in setting up Eden’s Approved Used operation.

“I was never really an academic, so when I started my career, I wasn't entirely sure what I wanted to do,” he said.

“I found myself in a role that I never, ever would have imagined myself doing when I was younger.”