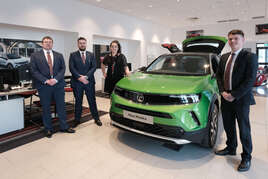 Renault, Dacia and Hyundai have been added to the existing Vauxhall and Ford authorised repairer site, with separate sales areas for Renault, Dacia, Hyundai and Vauxhall.

The service area covers all four manufacturers and continues its 80-year representation as an authorised Ford service and parts location.

Robert Forrester, chief executive of Macklin Motors, said: “We’re delighted to announce our further commitment to Scotland, as this substantial investment by Macklin Motors signifies our confidence in the region and follows the opening of our brand-new Peugeot, Kia and MG dealership in Edinburgh.

“A lot of hard work has gone into making our new Dunfermline site a fantastic facility for customers and colleagues. We are ready to offer the very best customer service and cater to a wide variety of motoring needs.”

The new dealership will add to its existing 38 colleagues, with the creation of up to 11 new positions across a range of disciplines, including sales and servicing, said Vertu.

A further 11 colleagues will be joining the location from a previous Renault site, taking the total number of colleagues at the new multi-franchise dealership to 60.

The move follows after Vertu Motors launched a recruitment drive to attract staff to four new Toyota franchised car dealerships after taking over the brand’s West of Scotland territory from Arnold Clark.