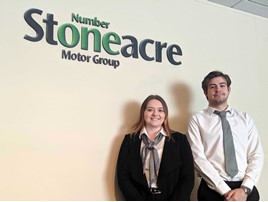 Stoneacre Motor Group has empowered dealership teams across its network to share news and images online part of a strategy that has seen it become one of the AM100’s top performers on social media.

Group social media managers Charlotte Stevens and Alex Hodgson have led a change in attitude at the group which allows individual sites to post to Twitter, Instagram and Facebook to the Thorne-based group’s Sprout Social platform to be fully vetted before posting.

The result of the move, implemented in 2017, is now being seen and Stevens described the efforts of staff to grow its engagement with potential customers around the UK as “a massive success”.

Stevens said the growth traffic to Stoneacre’s websites from Facebook equalled 92% of the entire total in 2018 during Q1 alone as traffic in Q1 from Facebook increased by over 1,000% year-on-year.

Lead generation from Facebook grew by 3,300% for the group, meanwhile, which now has over 90,000 aggregated followers across its 66 branches on Facebook.

Stevens said: “This gives us a higher fans per branch value than 13 out of 16 of the companies ranked higher than Stoneacre in AM100.”

“It has been an unbelievable level of growth since Alex and I went to the regional sites and gave a presentation on the benefits of social media,” said Stevens, who moved into a head office role after starting out at the group’s Doncaster Ford franchise five years ago and transforming its social media output.

“What we’re now trying to push as much as we can is user generated feedback, because Google prioritises the posts of individuals, rather than businesses, and this kind of thing is a clear recommendation to other potential customers.”

Stoneacre customers are now handed an A4 letter encouraging them to share their experience online upon buying a car from one of the group’s dealerships.

Across its regional operations, the group now encourages each branch to deliver two social media posts a day, which activity scheduled on the Sprout Social platform for several days ahead.

Hodgson said that the simple view of customer engagement that social media interactions affords the group has proven invaluable.

He said: “Our view of the customer journey through social media is so granular now, we can get a real idea of how our leads are reaching us from different platforms.

“Through the Sprout Social app we’re also able to do a lot of competitor analysis, which helps us identify which brands might be popular in certain areas and what kind of posts gain the most traction.”

Stoneacre believes that social media has assisted it as a lead generator with £1 million of car sales during the past 12 months, with 591 identified sales coming as a result of leads generated by interaction online.

Hodgson said: “That influence is only growing. The potential is huge and our efforts are starting to reap real rewards.”