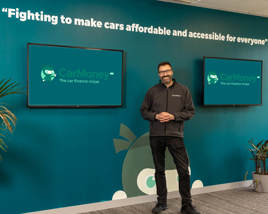 Peter Vardy's CarMoney is set to open its first regional sales and administration office in Dundee in response to rising consumer demand.

The Motherwell-headquartered company will be based at the Peter Vardy Group’s Carz site in Dundee’s Dunsinane Industrial Estate.

Up to 20 new quality jobs, including a sales manager and a team of salespeople, will be created, with further roles likely to emerge as the business develops, the company said.

Alastair Grier, managing director at CarMoney, said: “We are steadily carving out a bigger share of a strong marketplace throughout the UK and have added our presence to sites such as CompareTheMarket and GoCompare during this period.

“We have chosen Dundee as our next operational base because we know there is a great workforce there and we want to attract the best of them to our dynamic operation.

“On a personal note, my daughter, Emmeline, is currently a student in Dundee and is full of enthusiasm for the city and its people. I won’t deny that this has had a bearing on my thinking to locate our next operation here.”

CarMoney’s operation in Motherwell employs 128 people, up from 71 this time last year.

Grier added: “We continue to disrupt the market across the UK by applying technology to take away the discomfort of buying a car through helping customers smoothly navigate their way through the process, all the way from choosing the right vehicle from a respected dealer, to putting the best finance package in place.

“Most recently, we have been pushing hard to help customers to finance electric cars and have partnered with ZoomEV, the electric vehicle sharing platform which brings together electric vehicles and sharing economies to combat climate change.

“As to changing customer behaviours, we have noticed more and more customers applying for finance before looking specifically at cars in their quest to clarify the monthly payments and how much they can afford to borrow.

“This may be an early manifestation of a developing cost of living awareness, but it is still early days.”

Peter Vardy group has raised more than £200,000 for the people of Ukraine and said it would donate 10% of its profits in March 2022 to humanitarian projects in the country.