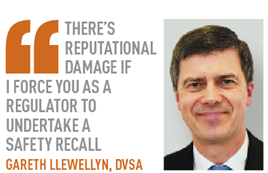 The Driver and Vehicle Standards Agency (DVSA) has sought and received clarification on the legal powers it has to force vehicle manufacturers to issue recalls on safety-critical issues.

The clarification followed investigations into Vauxhall’s Zafira model B fires and BMW’s recall of 312,000 vehicles due to an electrical fault.

BMW issued a recall of 36,000 vehicles in April 2017 after the death of Narayan Gurung, a former Gurkha soldier who was killed when his car crashed into a tree after he swerved to avoid a broken-down BMW. A further 312,000 vehicles were recalled on May 9 this year, the same day BBC’s Watchdog programme reported on the issue.

The DVSA and BMW gave conflicting evidence on the sharing of information during the recall process during a transport select committee meeting on June 26.

When asked by the transport committee if BMW provided all information on the number of complaints it had received to the DVSA, Graeme Grieve, BMW UK chief executive, said it did, citing 106 complaints where the customer has experienced stalling or a cutting-out of the vehicle.

However, Gareth Llewellyn, the DVSA’s chief executive, told the committee: “No, didn’t. We have asked on a number of occasions for that information and we have still yet to receive it.”

Llewellyn said that while rare, there had been occasions, such as with Vauxhall and BMW, where he felt “the flow of information wasn’t the same as it was with other cases”.

After the meeting, the committee recommended that the Department for Transport (DfT) make the DVSA’s enforcement powers more explicit, rather than the current wording, which is “presumptive”.

Llewellyn then sought legal advice on the extent of the DVSA’s enforcement powers. This advice is what led it to its new recall process.

“We now send a letter to a manufacturer to say the DVSA will be legally forcing a recall within 10 days, which will be made public unless the manufacturer can prove why the recall isn’t necessary,” he said.

Llewellyn said this “triggers the potential for the DVSA to prosecute the manufacturer if it doesn’t issue a recall” if it has failed to respond adequately within 10 days.

“The DVSA can also write to all of the affected customers to tell them about the fault and to say that it has asked the manufacturer to recall affected vehicles, but they have failed to do so,” he said.

Llewellyn said the DVSA had already issued one of the new letters, which prompted a quick recall, and it was due to send another in the a few days after they spoke to AM.

He emphasised that there are hundreds of recalls a year in the UK, most of which are not safety-critical, and that they are handled well with communication between the DVSA and manufacturers.

Llewellyn said: “With most manufacturers, the vast majority of recalls work really well.

“But we want to be very clear that there’s reputational damage if I force you as a regulator to undertake a safety recall on what can be a large fleet.”

Llewellyn said the agency still has other issues with the range of its powers: “The Consumer Rights Act of 2015 failed to reinforce the role for DVSA of entry, search and seize. That’s one element we don’t have access to.

“In the Vauxhall investigation, we have had to team up with Trading Standards in Luton to do that and under our current advice, we still don’t have the power to enter, search and seize.”

The DVSA also wants more influence and involvement with manufacturers’ initial risk assessment of a fault, to determine whether a technical or safety-critical recall is necessary.

Grieve couldn’t give an exact date for when all of the recall work would be completed, but he said “it will take us into 2019 to get it completed”.

While dealers will be compensated by BMW for the recall work, it will compete for space with more lucrative retail work.

As a result, BMW is redeploying a team of 23 mobile roadside assistance technicians to help, and it may establish some “dedicated facilities” to help complete the recall as quickly as possible. It is also sending 50 temporary staff into the network, and is encouraging dealers to find “creative ways to create capacity”, such as using bodyshops and PDI centres.

Professor Klaus Kompass, vice-president of vehicle safety engineering at BMW, also confirmed that he is working on an update, to be introduced next year, that will send specific warnings to BMW’s Connected infotainment screen and to the BMW Connected app on owners’ smartphones.

These messages will be more specific about the problem affecting a vehicle and explain the urgency to take a car to an authorised repairer.

Kompass said: “We will only send out those messages when we feel the urgency is high enough to get them into the repair shop.”

The DVSA also said it would look at the potential to prosecute owners of cars who refuse to get their cars repaired in safety-critical recalls.

BMW said it would only be able to complete repairs on about 80% of affected vehicles as some will be off the road, exported or the owners will ignore the three notices sent by the manufacturer.

At the committee’s suggestion that vehicle owners should be prosecuted, Llewellyn said it would be relatively easy to pick up data from the MOT process, but it was a question for the DfT to answer.

He said: “In Germany, if you miss your first recall, the equivalent of the DVSA will take the number plates from the car and the owner will no longer be allowed to drive it.

“The first step is to see how much of a risk is out there from vehicles that haven’t had their fix from a recall.”

Going by BMW’s estimates of an 80% success rate on 312,000 vehicles, that could mean there are still 62,400 affected vehicles on UK roads that could cut out while in motion.

A DfT spokesperson refused to comment directly on whether it would consider prosecuting vehicle owners for ignoring safety recall notices.

However, she did say: “Our priority is to protect drivers and the public from unsafe vehicles.

“We are working with the DVSA to review the recall system as a matter of priority, so that emerging safety issues are identified quickly and the DVSA uses their enforcement powers to compel manufacturers to take appropriate and rapid action.”

The committee said it also wants to look at making it mandatory for manufacturers to put a failsafe in vehicles, meaning that if they experience a loss of power, a back-up system means the hazard lights would still work.

Llewellyn said: “On the day of the accident, the most valuable thing at the time would have been for the hazard warning lights to have worked.

“You would normally have safety systems as a failsafe. It is amazing that hazard warning lights are attached to the same terminal as everything else in the car so when you lose power, you lose the one thing you need at that time.

“That’s a manufacturing consistency across most operations and I wonder whether that’s a future modification that would have paved the way for a better outcome here.”

The committee is also looking at how independent garages gain access to technical recall information.

The owner of the BMW that caused Gurung’s death had taken his car to an independent, but the fault was not correctly identified or fixed.

Grieve said: “Many other manufacturers provide the same services, but, if you are an independent, quite often you will be servicing a range of manufacturers’ products and marques.

“It is unlikely as an independent that you would access a multiplicity of manufacturers’ systems. There is a role here, perhaps for the committee or the DVSA, to look at a UK system that would allow us to combine that information.”