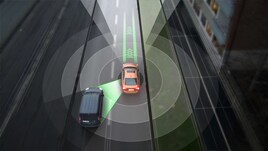 Changes to the Highway Code are set to make watching television at the wheel permissible for motorists travelling in a “self-driving” car.

The Department for Transport (DfT) has determined that it will remain illegal to use mobile phones and other handheld devices in self-driving mode, given the greater risk they pose in distracting drivers as shown in research, however.

Today’s DfT statement said: “We are modifying the application of this regulation. This is to enable drivers to view information of any sort on the in-built apparatus of their vehicle, provided their vehicle is driving itself and has been listed as an automated vehicle under the Automated and Electric Vehicles Act 2018 (meaning that it is a ‘self-driving’ vehicle).

“The in-built infotainment apparatus is designed to cut out such activities when the vehicle issues a request to resume control and so will assist in managing the driver’s attention.

“Therefore no changes are being made to the prohibition on use of handheld devices set out in regulation 110 of The Road Vehicles (Construction and Use) Regulations 1986.”

No self-driving cars are currently allowed on UK roads.

The first use of self-driving technology is likely to be when travelling at slow speeds on motorways, such as in congested traffic.

Commenting on today’s outlined changes to the Highway Code Transport minister Trudy Harrison said: “This is a major milestone in our safe introduction of self-driving vehicles, which will revolutionise the way we travel, making our future journeys greener, safer and more reliable."

Harrison, who last year stated that the UK must move away from “20th century thinking centred around private vehicle ownership” and towards shared mobility, added: “This exciting technology is developing at pace right here in Great Britain and we’re ensuring we have strong foundations in place for drivers when it takes to our roads.

“In doing so, we can help improve travel for all while boosting economic growth across the nation and securing Britain’s place as a global science superpower.”

The Government announced proposals last year that the use of “self-driving” driver assistance systems would be permitted on UK roads.

ICDP manaing director Steve Young later told AM that the move could trigger "self driving chaos".

It said that drivers of vehicles equipped with autonomous lane-keeping systems (ALKS) could be permitted to use them at speeds up to 37mph on motorways.

Government is continuing to develop a full legal framework for self-driving vehicles with the aim of supporting the widespread deployment of the technology by 2025.

Mike Hawes, SMMT chief executive, said: “With the right regulations in place, consumers are set to benefit from safer, more efficient journeys while the UK will strengthen its position as a global leader in the deployment of self-driving technology.”

Earlier this year the Law Commission of England and Wales and the Scottish Law Commission suggested that car makers should be legally responsible for any crashes caused by their self-driving cars.

The recommmendation forms part of a joint report for the safe and responsible introduction of self-driving vehicles.