Charging an EV more expensive than filling up with petrol, research finds 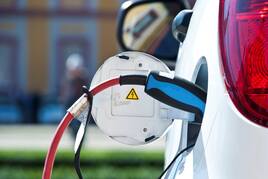 The cost of charging an electric car at motorway services can be up to 28% higher than filling up with petrol, research by What Car? has found.

The public charging experiment's results were published ahead of Ofgem's confirmation that the cost of charging an electric vehicle (EV) at home, on a standard variable tariff, is set to increase by around 20% this winter.

What Car? drove two EVs and their petrol-powered equivalents in convoy between Cobham Services, south-west of London, and Skelton Lake Services, near Leeds – a 208-mile journey.

The fully electric Peugeot e-208 went head-to-head with the petrol-powered 208 Puretech 130, while the larger BMW i4 M50 electric car was compared with the closely related 4 Series Gran Coupé M440i petrol.

All the vehicles started with a full battery or tank of fuel. Then on arrival, they were plugged in or brimmed to find out how much the journey had cost, with the e-208 and i4 working out £9.07 (28.4%) and £5.64 (10.8%) more expensive than their petrol equivalents, respectively.

What Car? said the differences would be bigger now, as petrol prices were close to an all-time high; What Car? paid £1.99 per litre at the time of the test.

By contrast, the 69p/kWh rate to access the Ionity rapid chargers that were used has remained the same since 2020, even though wholesale electricity costs have risen since the start of 2022.

Paying 'through the nose'

What Car? editor Steve Huntingford said: “When deciding whether an electric car is right for you, it’s important to consider how you would charge it.

“Even with energy bills going through the roof, an electric car should cost significantly less to run than any petrol alternative if you can top it up at home overnight.

“However, as our test has shown, lower fuel bills are certainly not a given if you’re relying on the public network, due to the high prices of some companies.

“The Ionity units that we used are some of the most convenient due to their fast-charging speeds and the fact that there are usually several at each location, reducing the chances of you having to queue, but unfortunately you pay through the nose for that convenience.”

What Car? said in each case, the petrol and electric cars had the same driving mode selected and they were all driven at the speed limit where conditions permitted, with their climate control systems set to 21 degrees-Celsius.

The cost of cars is the top-priority for car-buyers as the cost-of-living crisis bites, according to findings from Close Brothers Motor Finance’s Dealer Satisfaction Survey and the price of electricity has become the main reason for buyers to decide against buying a new electric car, according to Riverdale Leasing.

This week AM's sister title, Fleet News, reported that the cost of charging an EV at home is set to rise by 20% this winter.

The research from What Car? highlighted the increased demands on car retailers to offer good advice to car buyers amid volatile energy prices.

Figures for London to Leeds trip

Electricity cost comparison (based on efficiency in test)

Petrol cost comparison (based on efficiency in test)