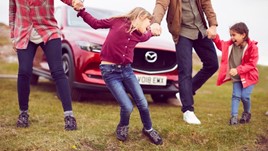 Mazda UK has teamed up with Film4 for a two-year television marketing campaign which will feature its MX-5 sports car and CX-3 SUV in a series of short films.

Mazda UK’s two-year sponsorship of Film4’s 9pm film started last month but the Japanese manufacturer’s new ‘Together is a wonderful place to be’ idents debut on Film4 this Monday (July 16).

The brand said that the adverts build on Mazda’s ‘Drive Together’ marketing campaign, which celebrate the joy of driving, and are based on the theme of memorable journeys shared with family and friends.

Mazda UK Marketing Director, Claire Andrews said: “The 9pm film every night on Film4 is a place for family, friends and loved-ones to spend time together watching a great movie.

“We all know that feeling and our new films beautifully highlight a similar sense of togetherness in the iconic Mazda MX-5 sports car and the award-winning Mazda CX-5 SUV.”

Mazda’s new campaign films were shot in the Scottish Highlands and 20 different versions have been made for the flagship 9pm film slot on Film4.

There are also three 20-second edits, which will run on 4OD, Channel 4’s video-on-demand service.