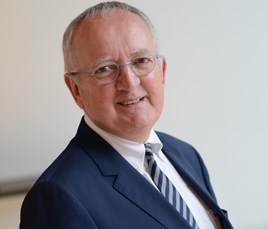 Vauxhall Motors managing director Stephen Norman has admitted “I’ve made many, many, many mistakes” in a candid interview which reflected on his career in automotive marketing.

The former PSA Group senior vice-president of sales and marketing was brought in to the Vauxhall fold to transform the fortunes of the brand after market share fell to 7.4% and was in decline.

A month after his arrival AM exclusively reported on his plan to cut a third of the brand’s UK retail sites.

But a year on Norman told AM that the brand was now “nicely established” for growth ahead of the 2020 arrival of new Corsa, Mokka and Vivaro products with a reduction from 326 to 307 franchised sites coming as “network profit has increased by 33% between 2017 and 2018, in terms of the average per retailer”.

In a candid interview with Marketing Week magazine this week, however, Norman not only focussed on his repositioning of the brand with a new focus on Britishness, but also revealed insight into his earlier career as a marketing specialist with Volkswagen.

The self-proclaimed perfectionist was not shy about admitting his failures to the magazine, revealing: “I’ve made many, many, many mistakes, one or two of which have cost me my job.”

Norman told Marketing Week that, while at Volkswagen and launched the new Golf 4 in France in 1998 one marketing campaign had depicted The Last Supper.

“Jesus Christ extended his arms and a bubble came out of his mouth, which said ‘Rejoice, the new Golf has arrived’,” he said. There was also an iteration featuring St John the Baptist taking out the rubbish.

The adverts were met with criticism from religious groups and Norman said that he saw “the whole world collapse around our ears”.

Right now he is very much focussed on rebuilding the fortunes of Vauxhall under the ownership of the PSA Group, however.

Unafraid to admit Vauxhall had “lost its way” in his conversation with Marketing Week, he said that he had started the process of change by carrying out a deep-dive into the brand’s data and wasted no time in meeting with the brand’s dedicated agency Velocity, which is part of McCann.

Its new ‘A British Brand Since 1903’ campaign was presented to him and approved by the board in the space of less than two months.

Norman said that, a year after that campaign’s launch, he was tentatively pleased with the results.

“I’m not going to say to you we’ve cracked it, but we’ve stopped going down. Now the job is to make it go up,” he said.