Audi halts A4, A5 and A8 production at Neckarsulm manufacturing plant 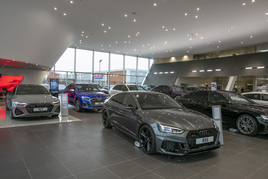 Audi has suspended the production of its A4, A5 and A8 saloon cars as component supplies continue to hamper the German premium car manufacturer.

While production of the A6 and A7 will continue at the site, the Volkswagen Group-owned brand confirmed that the three other models will not be produced between May 16 to May 20.

The war in Ukraine, the ongoing shortage of semiconductors and other components and COVID-19 lockdowns in China were all factors in the decision, Audi told Automotive News Europe.

Audi has also extended short-time working for employees at its Neckarsulm and Ingolstadt sites until May 31 in response to the supply chain difficulties.

AM recently reported that franchised car retailers considered an automotive supply chain recovery 'off the cards' as early as March following Russia's war on Ukraine.

A later news insight feature detailed how growing concerns about the automotive supply chain, a potential energy crisis and consumer confidence crash were feeding fears about the impact of the Ukraine-Russia war on UK car retail.

Rising energy and fuel prices, resulting from the conflict, have been key drivers in a rise in UK inflation to 7%, with some economic commentators now fearing that figure could reach 10% later this year.

In his analysis of the UK’s Q1 new cars registrations data for AM, David Francis suggested that Russia 'threw a hammer and sickle into the works' of 2022's car manufacturing recovery when it invaded its neighbouring country.