The average dealer has lost £300 less in the first two months of the year compared to 2015, according to figures from ASE.

Mike Jones, ASE chairman, said: “Notable from the SMMT new car registrations statistics from February was the significant increase in private registrations, which were 22.6% up in the month.

“This did not, unfortunately, correlate with a significant increase in new vehicle sales by dealers, which were 2% up year on year.”

This suggests that certain dealers or brands have started self-registering under the private category, he said.

“Used car performance has not, as yet, been negatively influenced by the self-registration exercises we have been undertaking with margins remaining steady at over 10%.

“Used car sales remained strong, up 2% year-on-year with dealers also concentrating on reducing stock from the January high in advance of the influx of part exchange vehicles in March.”

Average dealer stock investment fell by £96,000 during the month of Febuary, albeit there has still seen an increase of 5% in stock value compared with 2015.

“With March registrations strong and the overall quarter well up on 2015, it will be interesting to see whether this equates to an increase in dealer earnings from bonus payments or whether we are merely processing more vehicles in order to stand still.

“Given the volume of vehicles registered in the last few days of the month, we are expecting used stock levels to rise once more.” 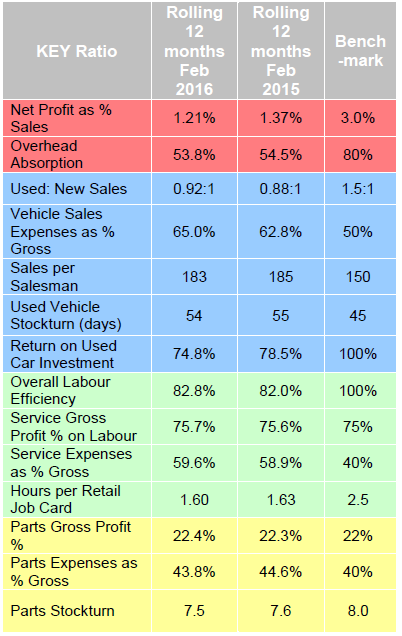