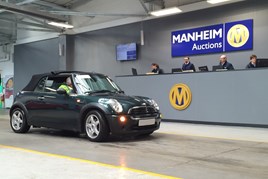 The price of EVs rose by 8.7% alongside a 1.2% decline for diesel cars as demand for alternative fuel vehicles continued to increase in April, reports Manheim and Motors.co.uk.

The Cox Automotive brands joined forces to publish their wholesale and retail reports for the month today, and once again revealed a trend of rising demand for alternative fuel vehicles.

Data from Motors.co.uk showed that while the average retail selling price of diesel cars fell by £173, with figures remaining stable for petrol vehicles, electric car prices increased by £1,087 – representing less than one in every 1,000 cars sold in the retail market.

Overall Manheim and Motors.co.uk recorded a slight softening in the wholesale market in April, alongside strong retail activity.

Conversion rates appeared to remain strong, with Manheim’s data showing an average of 9.5 days in stock for vehicles sold at auction – an increase of less than one day from March.

Retail days in stock were down 2.4 days from March to an average of 43.3 days.

In the retail market, Motors.co.uk data indicated that volume brands recorded the quickest sales in April, with an average 42 days in stock, compared to 48.4 for prestige brands and 63.2 days for luxury brands.

The relatively scarcity of luxury cars in the wholesale market led to the converse situation at Manheim’s auctions, with high-end cars recording just 6.2 days in stock, compared to 9.7 days in stock for both prestige and volume brands.

Within the wholesale market, average selling prices for franchised dealer part-exchange stock remained relatively static, with a reduction of £49 (1.3%) to £3,623, while conversion rates were still strong at an average of 7.3 days in stock.

National fleet vendors saw selling prices of their vehicles at Manheim’s auctions rise by an average of £402 (6.3%) in April, to £6,799, reflecting strong demand among consumers for quality used cars, with known provenance and good service history.

For younger, lower mileage manufacturer fleet stock, average auction selling prices softened in April, falling by an average of £1,432, down to £12,497, likely reflecting the pressure on dealers to achieve targets for new car sales and the attractiveness of PCP financing for car buyers.

The average mileage of vehicles sold at Manheim’s auctions continued to decrease, with an average odometer reading in April of 63,733, down 2.2% from March.

A fall in driven distances was recorded for all vendor stock, with manufacturer fleet vehicles showing the biggest monthly drop in mileage of 11.1%.

Warmer weather drove wholesale demand for convertibles, with the average selling price of cabriolets rising by £556 (11.2%) at Manheim’s auctions.

Dealers appear to have acted early to get hold of stock, as demand for convertibles in the retail market did not show any comparable increase.