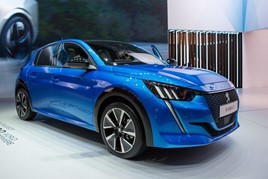 The average price of a new electric vehicle (EV) has risen by 13% since 2013, according to a study of the market’s most popular models conducted by automotive data specialist Cap HPI.

The findings come as the Society of Motor Manufacturers and Traders (SMMT) today (March 5) called on Government to remove VAT from alternative fuel vehicle (AFV) sales and ensure the continuation of the plug-in car grant (PCIG) to encourage their sales with “price parity” with their diesel or petrol powered alternatives.

Cap HPI said that its research reviewed base versions of the BMW i3, Kia Soul Electric, Nissan Leaf and Renault Zoe, all of which fall into the market’s “relatively affordable” AFV price range of of £18,000 to £35,000.

And it reasoned that, although prices had risen markedly at a time when AFVs are widely seen as the immediate answer to lowering the CO2 emissions of vehicles, buyers were being compensated by way of better-equipped cars.

Among the new entrants set to arrive in UK showrooms in the early part of 2020 are PSA Group’s DS 3 Crossback, its recently-crowned European Car of the Year, the Peugeot e-208 hatchback, e-2008 SUV and Vauxhall Corsa e.

Other new EV models arriving in 2020 are the Mazda MX-30, Honda e city car and the first of Volkswagen’s ID range of zero emission models, the ID 3 hatchback.

Cap HPI said that it had made significant increases in the data volumes available for battery electric vehicles over the last 12 months to accommodate this growing sector and meet market demand.

The company has added new data fields including battery capacity and fast charging information during a recent major upgrade of electric vehicle data.

The increase in data volume and accessibility will empower the automotive industry to provide more accurate vehicle identification and drive accurate valuations, the total cost of ownership figures and a host of other data services.

The EV data offers a detailed list of fields to cater for several variables within the category. As an example, there are four stages of battery charge speed relating to all the different manufacturer information along with more standard fields.