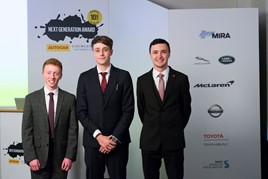 Glasgow University mechanical engineering student Lewis Campbell has won the Autocar-Courland Next Generation Award 2018 with an innovative solution to the problem of car cloning.

His concept of storing vehicle information using blockchain technology – effectively creating a digital ledger – rather than via physical checks and documents such as the VIN or V5C documents, would make cloning vehicles much harder for criminals.

Autocar’s editor-in-chief, Steve Cropley, said: “Once again, we saw an incredible breadth of talent enter the competition. Many of the entrants came up with some truly innovative ideas that left the judges deeply impressed.

“Coming up with a list of three finalists was hard, and it was an even harder to narrow it down to a single winner.

"Lewis’ idea was not only innovative and unique, but it also aptly reflects the change we have seen in the last 10 years, with the industry rapidly embracing new and innovative technologies.

“It was an honour to once more work with all of the finalists, and I want to congratulate them all again.”

The Next Generation Award gives entrants a platform on which to build or develop a career in the automotive industry, with several past winners and finalists having gone on to successful careers in the sector over the past decade.

Campbell said: “I’m overwhelmed to have been chosen as the winner of this year’s Autocar-Courland Next Generation Award. The Next Generation has rewarded a succession of inspiring innovations over the past 10 years, and it is a great honour to have been selected to join that list.

“As a car enthusiast, it is with great excitement that I will be starting my work experience with some of the biggest names in the industry. I can’t wait to get stuck in and become fully immersed in the automotive world.”

Daniel Wilcox, a first-year automotive engineering student at Cardiff University, was applauded for his idea to create a double pulsating hazard light that would make it easier to distinguish from a turn signal.

Advertising graduate Robert Cameron came up with the idea of a web-based system that would allow consumers to realistically compare their current car’s performance against a new vehicle.

"In the last 10 years, we’ve seen some incredible entries, and have witnessed some very talented people find their way into the automotive industry. ”