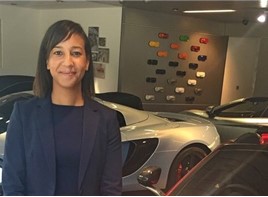 Autocar Great British Women in the Car Industry award winner Charlotte Stevens has said that “the sky’s the limit” thanks to the opportunities and support provided by her current employer Jardine Motors Group.

The aftersales manager at the AM100 group’s McLaren Automotive franchise in Ascot told AM that while she fears a lack of acceptance of women in the automotive sector could still hamper the careers of those who find themselves with less supportive employers, she is confident of progressing.

Stevens, who received the Autocar awards’ 'Aftersales and Workshop' accolade at last week’s prestigious ceremony in London, said: “I previously found myself in another role where I didn’t feel I was wanted or valued because I was a woman. I raised a complaint at director level and I was basically told it was all in my head.

“That experience has left me worried about what I might face if I were to leave my current retail group, so I suppose it has limited my career in a sense, but the support I have here at Jardine is fantastic.

“Honestly, I feel the sky’s the limit in my current role and the only thing keeping me from progressing to a brand director level is a lot of hard work. That’s a great position to be in.”

Stevens, who accepted her award as Charlotte Dafe, having been married just a month ago, said that last week’s Autocar awards were “inspirational”, adding that she could really relate to guest speakers.

Aston Martin's President of the Americas, Laura Schwab, and tennis coach Judy Murray both took to the stage to share their career experiences.

Stevens said that she knew what experiencing the “imposter syndrome” discussed on stage had felt like from first-hand experience and added that she was pleased the event had reminded her she was not alone while adding awareness and openness to the issues being experience by women in the sector.

“I currently mentor a young woman within my business and I do, perhaps, give her a little more support than the young men, but that’s because I know it can be tough,” said Stevens.

“I think it’s important that we acknowledge that and talk about it to ensure that others don’t feel they aren’t being heard in future.”

Stevens started her working life at Heathrow Airport, working in a customer service role for an airline, but later transferred her skills into automotive retail.

She told AM that she hasn’t regretted it for one moment, adding: “It’s a fantastic industry to work in. I’d encourage anyone to explore what roles there are for them.”

The Autocar Great British Woman Awards in the Car Industry Awards judges said that Stevens had successed in improving Ascot McLaren’s ‘Voice of the Customer’ score from 33 last year to 60 this year.

She has also successfully recruited, trained and motivated one of the most knowledgeable McLaren aftersales teams in the EU, and her best-practice ideas have been rolled out and implemented by McLaren Automotive, they said, adding that Jardine Motors’ recognition of her abilities had been reflected in her enrolment on the firm’s Leaders of the Future programme, and she looks certain to achieve her medium-term goal of promotion to general manager.

The full list of Autocar Great British Women winners from last week were as follows: