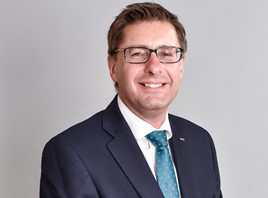 JCT600 has promoted operations director Richard Hargraves to the post of managing director, praising his “nurturing” approach and his “key role” in the growth of the Bradford-based car retail group.

In his new role Hargraves will work closely with chief executive John Tordoff and support the operations board in managing the AM100 group’s 48 dealerships, which span Yorkshire and the North East, Derbyshire, Lincolnshire and Nottinghamshire.

Tordoff said: “With over 30 years’ experience in the motor industry, Richard has a wealth of knowledge and has played a key role in our continued growth.

“As a company that prides itself on nurturing and developing its team, he is a great role model for colleagues as he has risen through the ranks and understands the business inside out.

“Working as a member of our four-strong main board, Richard’s new role will further strengthen the management of the business as we continue to evolve and build on our position as one of the most successful motor groups in the UK.”

Hargraves joined JCT600 as a used car buyer in 1999 and was promoted to sales manager within 18 months before moving to the role of BMW general manager five years later, at the age of 29.

After a five-year spell as a dealer principal at Preston’s BMW Hargraves returned to JCT600 as brand director, assuming responsibility for three Porsche Centres in Leeds, Newcastle and Sheffield, as well as the company’s Bentley dealerships in Leeds and Newcastle and its BMW/MINI dealership in Bradford.

The group's latest financial results, for the period to December 31, 2018, revealed a 2% rise in turnover to £1.28 billion as profits held flat in what was described as a “challenging year”.

Commenting on his new appointment to managing director, Hargraves said: “I am really excited about my new role and look forward to working with our hugely experienced team of directors and talented colleagues throughout the business.

“My aim is to ensure that we remain one of the most respected and trusted names in the sector as we continue to evolve our retail model in line with customers’ needs in order to deliver the first class experience they have come to expect.”