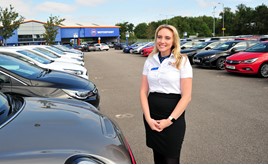 Motorpoint sales executive Sophie Johnson is set to feature in a new BBC TV daytime show that will highlight working in the automotive retail industry.

The 24 year old, who has worked for the UK independent car retailer in Widnes for the last two years, is one of the contestants in episode three of ‘Call That Hard Work’ which airs on BBC One at 3.45pm on August 19.

The show sees Johnson and two other contestants, a florist from Sheffield and a personal trainer from Bradford, swap jobs for a day and rank various elements of their particular job out of 10.

The person with the highest score at the end of the show is deemed as having ‘the hardest job’ and wins £1,000.

Johnson said: “We were definitely taken out of our comfort zone doing the show as you’ll see for yourself.

“For instance, one minute I was taking part in a gym class and the next minute I am taking the next class.

“You definitely learn how to think on your feet in those situations. I won’t even mention how I got on arranging flowers. I’ve definitely got a new found appreciation for florist’s that’s for sure.”

Johnson is sworn to secrecy on who was deemed to have the most challenging job.

She added: “What I can say though is that I learnt a lot about myself making the programme.

“Even though it was fascinating to find out what other people do for a living I realised at the end of filming that I really enjoy what I do at Motorpoint and making the move from qualifying as a midwife to delivering cars to customers was the right career choice for me."