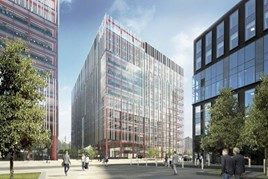 Auto Trader is making preparations to move its Manchester headquarters into a new 80,000 square foot office facility which gained approval from city planners earlier this year, AM understands.

Place North West reported that the online classifieds giant was set to take advantage of a lease break on its current 60,000sq-ft HQ – set to come up in 2024 – to relocate into the larger facility which is being developed by Ask Real Estate.

The planned property is located just a short distance from Auto Trader’s current offices, which it moved into back in 2015, and forms part of the same First Street development.

According to Place North West Manchester City Council approved Ask’s plans for the 11-storey block containing 270,000sq-ft of office space and 11,700sq-ft of retail space on the ground floor in April.

It will occupy a two-acre site off Medlock Street once complete.

AM has contacted Auto Trader to enquire about the reported plan to move its Manchester offices, but has yet to recieve and official response.

The Auto Trader business has been on a growth trajectory since it moved into its Manchester HQ, with 600, staff, five years ago.

This growth in profitability came despite a one-off £8.7m profit recognised on disposal of Smart Buying to its new Dealer Auction joint venture being included in its results in the prior year.

The average revenue generated per retailer forecourt each month during the period up to the end of March this year was up 6%, or £105, to £1,949 (2019: £1,844), with “growth from product and price offsetting the expected reduction in stock”, according to Auto Trader.