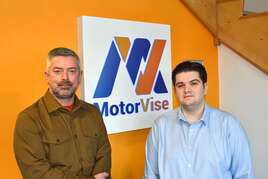 MotorVise Automotive has expanded its team after securing 20 new clients in the past three months.

Fraser Brown, founder and managing director of MotorVise Automotive, said: “Despite the ongoing challenges affecting the manufacturers, there is growing optimism among car dealers that they are experiencing a return to some type of normality.

“Predictions that online car sales would replace the showroom have been wide of the mark and dealerships are now fully engaged in selling cars and attracting customers through the doors.

“MotorVise is extremely busy as dealerships seek to grab their share of the market by investing in recruitment, training, sales events and showroom software.

“The increased demand for our services is also in line with the widespread change in the way dealerships engage with customers, which is by focusing on outstanding customer service experience.”

Dealers that seek to recruit salespeople with the "right customer-focusekills" can expect to improve the gender balance within their business, said Brown.

As a result of the increase, MotorVise has appointed Jack Devenney as business delivery executive, and William Atkinson-Browning as training administrator.

Devenney previously carried out HR administration for a group of businesses. He said: “It’s great to be part of a growing business, whose ambition is to be the best at what it does.”

Atkinson-Browning served with the Scots Guards for almost 25 years, becoming training colour sergeant responsible for the training and continued professional development of 145 soldiers.

He said: “I have many transferable skills from my time in the military that fits with the company, particularly my background in training. I’m excited to have joined Motorvise, which continues to expand its well-qualified and motivated team.”

Franchised car retailers should be working hard to secure new car supplies early with a Q1 2022 marketing and sales events push, according Brown.