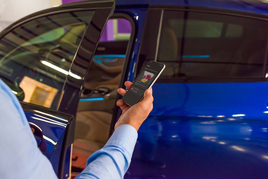 CitNOW has announced the winners of its annual Digital Spotlight Awards, which recognise automotive businesses with the best digital customer communications.

The awards programme was revamped with five new categories, this year, to recognise the increasingly important role of digital communications in the face of changing consumer behaviours and ongoing trading challenges.

Video production has ramped-up markedly over the past two years, resulting in the landmark number of videos being produced using CitNOW software.

Jack Howard at Sycamore MINI in Peterborough received the Best Customer Delight Video accolade for going above and beyond by creating an engaging video in response to the customer asking for detailed images.

When awarding Best Vehicle Showcase Video, the judges thought Jessica Richardson from Sytner BMW in Nottingham delivered the most complete package with her video, calling it friendly, informative, and engaging.

Miguel Edie at Mercedes-Benz in Leicester quickly responded to the boom in used car demand by sharing a prospecting video with existing customers to suggest selling or part exchanging their current vehicle. As a result, he picked up the Most Creative Video award.

In winning the Best VHC Video, Nick Giles at Specialists Cars BMW in Tring proved that video can be just as impactful in the workshop as it is on the forecourt. The judges thought that Nick gave a masterclass in how to share technical insight, explaining why he was recommending new tyres in a clear and credible way, with a friendly tone that would have created instant trust with the customer.

The winner of the Best Diagnostic Video, Tom Rush, is only in the second year of his apprenticeship at Listers BMW/MINI in Boston – a fact that made the judges even more impressed with his camera work and delivery. Tom uncovered a couple of issues with the car that the customer may not have been expecting and made sure that they had no reason to be alarmed by using a friendly manner and reassuring language to put them at ease.

All the winning videos, and those that were Highly Commended in each category, can be viewed here: https://digitalspotlight.citnow.com/winners/.

Carol Fairchild, chief customer officer at CitNOW Group, said: “CitNOW strives to provide retailers with the digital tools they need to deliver the ultimate customer experience – so it’s important we celebrate those individuals who share our ambition and go the extra mile for their customers.”

Entries for the 2022 Digital Spotlight Awards are being accepted now.

AM readers voted for CitNOW as a clear winner of the AM Awards 2021's Supplier of the Year Award.

AM Awards 2021 winner: Supplier of the Year, CitNOW

AM Awards 2021 winner: Supplier of the Year, CitNOW