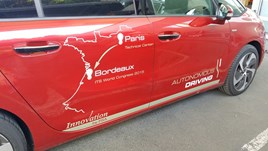 The entire trip was completed entirely in autonomous mode, without driver involvement and was part of the Intelligent Transport Systems (ITS) World Congress, which runs from October 5-9.

The car autonomously adjusted its speed and changed lanes to overtake, taking into account other vehicles, speed limits and infrastructure.

PSA says the prototype will pave the way for technology which will “soon be applied to production models”.

Carlos Tavares, PSA Peugeot Citroën chairman of the board, said: "The journey made by our prototype today proves that autonomous vehicles are no longer of matter of science fiction. This ushers in a new era for mobility, which I find truly exciting."

PSA Peugeot Citroën is presenting its autonomous vehicle and its car-to-car and car-to-infrastructure communication systems at the 22nd ITS World Congress.

The infrastructure system uses data transmitted by other vehicles to enhance the awareness of a vehicle’s surrounding environment. The idea is to improve road user safety by anticipating certain critical situations to reduce the number of accidents on the roads.