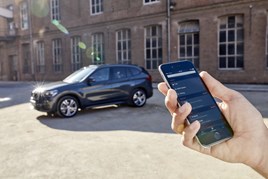 The new app links drivers’ devices to their BMW and scans for any mobility-related information and notifies the driver of the ideal departure time for arriving at their destination punctually on the basis of real-time traffic information.

Drivers can also import places and points of interest from other apps into the BMW Connected to wirelessly pre-load them into their BMW ready for their next journey. Once the journey has begun, a pre-worded SMS message containing the current arrival time can be sent straight from the vehicle to selected contacts, such as the people attending a meeting.

The app will notify users with “time to leave” messages to make sure the driver sets off to arrive at their destination on time.

The “Personal Learned Destinations” function recognises the places and locations that the user drives to regularly and automatically stores them as favourite destinations. This is supplemented by BMW Connected’s ability to also recognise personal mobility patterns, such as the daily drive home from work and collecting children from school on the way.

For example, if unusual traffic conditions would cause the a driver to arrive home late, for instance, BMW Connected takes action by alerting the user and suggesting the earlier departure time it has calculated for arriving home at the usual time.

Other features also include Last Mile Navigation to continue a route on foot once the driver has left their BMW, remote services to activate air-con, vehicle locking and unlocking and flashing lights to locate a car in a car park.

BMW said the new app is the first generation and it will continue developing it and adding more features. It has initially only been developed for Apple products.

Once launched, BMW Connected will be available as a free download from the Apple App Store, and can be used in BMW vehicles with the BMW “ConnectedDrive Services” activated, a feature which became standard on all new BMW’s in January 2016. BMW said there are approximately 400,000 BMW’s capable of using this service on the road in the UK.