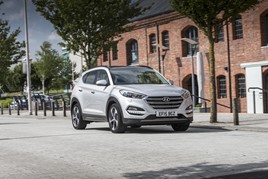 Used Hyundai Tucsons left dealer forecourts faster than any other car in March, according to a new report from Indicata.

The popular SUV took an average of 39 days to sell, beating its rivals the Kia Sportage, VW Tiguan and Renault Kadjar.

The Dacia Sandero and the Ford Focus were the second and third fastest-selling used cars at 40 and 41 days respectively.

Overall, stocking days were shorter in March than Febuary - according to Indicata - as the used car market continues to remain strong.

Nissan’s Leaf appears at number four in the table, selling on average in 43 days.

Indicata says this is further proof that electric cars are becoming more accepted in the UK, particularly as the average used price was £21,264, the fourth highest value car on the list.

“The Hyundai Tucson has been in our top 10 for the past few months so we know it’s a popular used car.

The Renault Zoe was the first EV to appear in the top 10 in December.

The Indicata report analysed more than 84,000 used cars sold by UK car dealers in March 2019 between six and 36 months old.

SUVs and smaller hatchbacks were the most popular used cars. The Dacia Sandero was the cheapest car on the list at £7,932, while the Volvo XC60 at £30,912 was the most expensive.