Auto Trader has reported that the average price of a used car has risen by £3,000 since May as the imbalance of consumer demand and vehicle supply shows no sign of abating.

The online automotive marketing specialist revealed that almost one-in-four nearly new cars was being advertised at a value higher than their brand-new equivalents in October as manufacturers battle to deliver vehicles amid a shortage of semi-conductor microchips and other components.

As car buyers searches for available and affordable vehicles intensifies, Auto Trader said that its audience had increased 30% year-on-year in October as retailer enquires surged 40%.

Richard Walker, Auto Trader’s director of data and insights, said: “What we’re currently seeing in the market is the result of basic economics – exceptionally strong consumer demand and a constrained supply chain which simply cannot catch up.

“Looking ahead, demand will continue to be fuelled by healthy levels of consumer confidence, a positive shift towards car ownership, and the 1.5 million ‘lost’ car sales in 2020.

“Add to the fact it’s unlikely we’ll see a strong return on supply levels due to the fall in new car sales volumes over recent years and the lower levels of pre-registration, we can expect strong year-on-year price growth to continue well into next year.”

According to the Auto Trader Market Insight tool supply was down 12.2% last month when compared to October 2019.

Auto Trader’s data showed that supplies of used petrol and diesel cars had dropped by 5% and 12.8% year-on-year respectively.

Walker said: “Although we may see some slight week-on-week softening as a result of typical season trends, for year-on-year growth to slow to the low single digit levels we saw pre-pandemic, supply and demand levels will need to even out.

“From what we’re seeing in the market, the wider economy, and the hundreds of thousands of daily price observations we’re able to track across the live retail market, there’s simply no evidence to suggest that will be anytime soon.”

Auto Trader’s data showed that Jaguar Land Rover’s (JLR) Defender 90 4x4 and XK Coupe were top of its rankings of most appreciating cars last month, with values up by 68.8% and 45.2% respectively.

Here is Auto Trader’s list of October’s most appreciating and depreciating used cars: 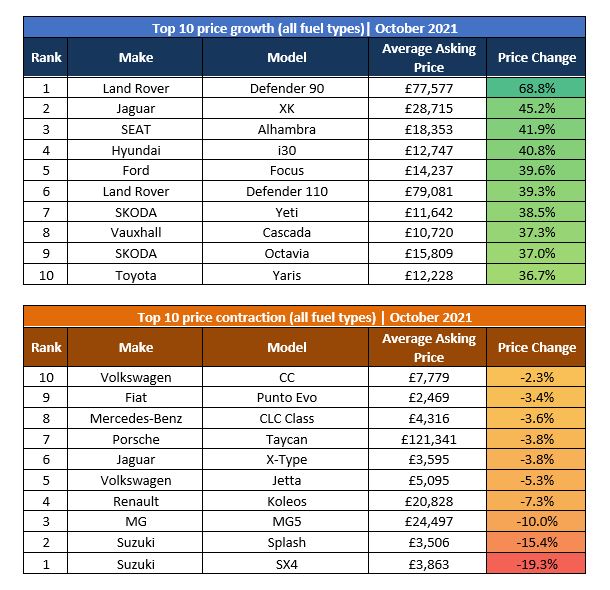