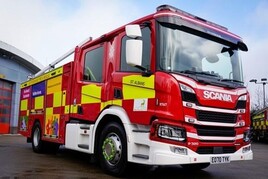 Fords of Winsford remains “open for business” after firefighters rushed to extinguish a blaze in the workshop of its used car supermarket site.

Four fire engines attended the scene and firefighters battled flames and smoke for fours hours after alarms alerted them to an incident at the car retail site on Weaver Valley Road, Winsford, at around 6am yesterday (January 23) morning.

Cheshire Fire and Rescue said that there were several vehicles in the single storey workshop, but nobody was injured in the incident.

A report issued by Cheshire Fire and Rescue said an investigation had revealed that an electrical fault had been the cause of the fire.

It said: “At around 6am firefighters received a report of a smoke alarm sounding at a car dealership on Weaver Valley Road in Winsford.

“On arrival crews discovered that there was a fire in a single-storey workshop measuring approximately 10 metres by 30 metres. The workshop contained several vehicles.

“Further fire engines were dispatched to the scene.

“It was decided that four fire engines were required.

AM was told that Fords of Winsford was open for business this morning.

Manchester expansion for Fords of Winsford

Manchester expansion for Fords of Winsford