The average overhead absorption rate dropped to 64% in March in what is traditionally seen as the  strongest month of the year.

According to the latest dealer profitability statistics from ASE overhead absorption is expected to drop to an average of 55% this year from a benchmark that has moved down from 100%, down to 80% and is creeping lower.

Despite the drop in absorption dealers have only seen an average net profit fall year-on-year in March from 1.8% to 1.7% in the important plate-change month.

The average operator has fallen slightly behind the prior year’s net profit as a percentage of sales ratio, however this is a result of increased vehicle sales levels. The profitability generated has remained slightly ahead of 2011.

With March being so important to the annual result, it’s the first real picture on how 2012 will unfold and whether initial trends are being repeated.

Mike Jones, chairman at ASE, said: “From a new car point of view this is reassuring as it means that the vehicles reported in the SMMT statistics are not merely registrations and have found themselves true homes to go to.

“In fact the growth over 2011 is greater than the official statistics, reflecting the continuing decrease in representation points as the industry rationalisation progresses.”

ASE said the current sales performance has been encouraging. Both new and used vehicle sales are up.

Profits per unit are consistent, with used grosses in particular holding up well in the current climate.

Used vehicle return on investment has taken its seasonal drop to reflect the increased level of stockholding at the end of March, however ASE expects that to fall back during April.

Jones said: “Maintaining the momentum in vehicle sales is clearly, therefore, going to be vital. In spite of the positive registration data many dealers reported it “going quiet” in April.

"Maintaining the improvement in productivity (and the relationship between costs and gross profit) in sales is going to be vital as Q2 progresses." 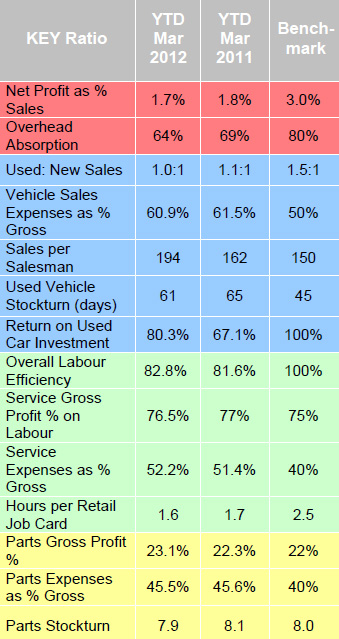