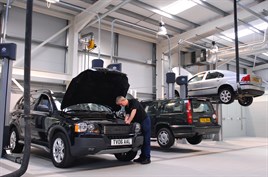 Three quarters of Volvo’s 110 UK dealer network have agreed to change their aftersales operations to have two-person technician teams working on vehicles as the Swedish brand looks to address servicing capacity issues.

The 83 Volvo dealers have committed to introduce MST before the end of 2017.

However, David Baddeley, customer service director Volvo, admitted take up of the brand’s new way of working has been slow due to how VPS has been received by the network.

He said: “Adoption has been slower slower than I would have liked or expected because there was some push back from dealers around technicians speaking directly with customers. There has been a bit of a cultural clash with some businesses.

“As a result we have decided to break out the MST and the PST elements of the new VRE and dealers can take those elements in stages. The majority of dealers understand MST and want to go ahead with it.”

Baddeley said there is a critical business need for the Volvo network to change the way its dealers’ aftersales teams are working due to having a capacity issue as a result of Volvo’s increasing market share.

He said: “An increasing car parc is a good problem to have, but currently all Volvo dealers are having a servicing capacity issue and the only other way to solve that is to expand the workshop or move to a larger premises, which is not really an option in most cases.”

Baddeley said splitting out the elements of Volvo’s new standards does not mean VPS will be abandoned, but dealers will be expected to add it to their business when they feel ready.

The time saved by MST is supposed to be spent with technicians talking with customers.

The idea behind VPS is that it increases transparency between the dealership and the customer, as well as reducing inaccuracies on job cards.

He said: “With PST, not every technician has to do it, just one of the two-person team.

“We have learnt a lot over the last two years with the 10 dealers that have been doing it and we want dealers to fit MST and PST around their business, discovering how it will best work for them.

“There has to be some control from dealers around how it’s integrated into their business or it won’t work.”

Dealers that sign up to both MST and VPS take on a 39 week in dealership training course completed in two week blocks which includes customer service modules for technicians.

Baddeley said evidence from the 10 Volvo dealers currently operating VPS and MST show an improvement from 86% to 93% for right first time, on time repairs. Average workshop efficiency has also improved by 7.5% to 93%.