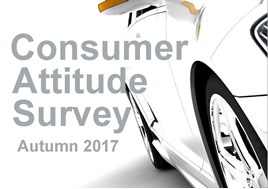 Franchised dealers are still struggling to overcome the perception of being a more expensive aftersales option than their independent counterparts.

Despite gaining positive results for their specialist knowledge, professionalism and safety, franchised dealers are still seen as a more expensive option, despite recording the lowest average servicing price among 1,000 respondents, according to Autumn 2017 NFDA Consumer Attitude Survey.

The survey found that the average price paid for a service at a franchised dealer was £146, compared to £147 at an independent and £151 at a fast-fit chain, but while 71% of respondents felt that represented good value for money, 81% applied that description to the more expensive alternatives.

Safety and professionalism are where franchised dealers scored most highly.

The Autumn 2017 NFDA Consumer Attitude Survey revealed that 67% of consumers think franchised dealers are the safest place to service their car.

Only 22% of consumers see independent garages as the safest and 11% believe high street national chains are the safest.

Franchised dealers are perceived as the safest also by those who have not used a dealership for aftersales care in the past two years.

Overall satisfaction with franchised dealerships’ customer service remains high, with 79% of customers stating that they were satisfied with their last experience (unchanged from the previous survey).

“It is extremely encouraging to see that franchised dealers continue to be seen by consumers as the safest place to get their car serviced”, said Sue Robinson, director of the National Franchised Dealers Association (NFDA).

“Our members are at the forefront of aftersales servicing with safety viewed as the number one priority across all franchised dealers in the UK.

“The survey has demonstrated very significant data which validates the work of the franchised dealer network over a number of years.

“The results of this issue of the Consumer Attitude Survey show that NFDA members are trusted by the consumer and, with high levels of manufacturer training and specialist tools and equipment, we believe this trend can further improve.”

The Consumer Attitude Survey was commissioned by the National Franchised Dealers Association (NFDA) and executed by Public Knowledge, a leading market research agency.

The survey polled 1,000 consumers across the UK in a 15-minute online survey between the 9th and 21st of June.

Public Knowledge considers the results statistically significant with a confidence level of over 99%.

The NFDA said that the main objectives of the survey were to explore current consumer perceptions of franchised dealers and their competitors as well as understand consumer aftersales behaviour.

In one of the survey's questions, respondents were asked to identify which words they most closely associated with each category of business: franchise, independent, national chain.