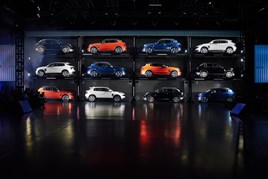 Lynk & Co claimed that it had become “the fastest selling car in the world” as online pre-orders of its 01 SUV sold out in seconds in Chinese market, ahead of its global roll-out.

The brand's online store received 6,000 ‘pre-sale’ orders for the 01 SUV in just 2 minutes 17 seconds, exceeding all expectations in a record sales start for the brand which is set to shun the traditional franchised dealer model with online sales and series of boutique stores.

In a statement issued today Lynk & Co - a brand operated by Volvo owner Geely Auto Group - claimed that 01 SUV had become “the fastest selling car in the world”, ahead of the official volume sales, which started on November 28.

"Now, just 12 months later, we start sales of our connected and shareable 01 SUV in record fashion.

“Online, it couldn’t be more simple, we have replicated the in-store experience and simplicity of choice with our unique ‘explorator’ carousel.

"Just stop on the car you like and subscribe online – it’s as simple as that, as Chinese customers have proven during our pre-sale event.

“We are immensely proud at the speed and scale of our launch. We promised to disrupt and shake things up, and now, the journey really begins.”

Sales officially started on November 28 with some 150 brand boutiques and stores about to open across China.

Inspired by the worlds of fashion and technology, trim levels and optional extras are replaced with a simple selection of fully equipped, one price collections.

Prices for the first collections of the 01 are announced today for the Chinese market only, and feature Volvo-derived petrol engines.

When production for Europe commences, new electrified powertrains will feature as standard with more technology and connectivity functions also added.

Prices in Europe will be higher than those of the first generation of collections revealed in China.

Visser said:“Online and in our stores, we take away the anxiety of ticking options boxes and the pressure of selecting the right specification.  We want to break down the barriers to car ownership.

“No complicated combinations or decisions to make, and no negotiating.  Our fixed price offering, subscription model, free connectivity and lifetime warranty take care of all the boring and complicated details, allowing the customer to focus on the fun stuff.”

Described as a ‘smartphone on wheels’, all models come with a large central touchscreen and telematics systems – always connected to the internet and the car’s own cloud.

Lynk & Co aims to challenge and redesign the way in which automotive products are bought, owned and used across the world.