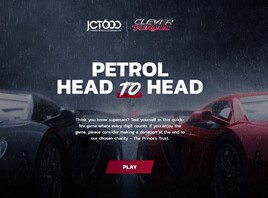 JCT600 has partnered with Manchester digital agency Code Computerlove to launch an online supercar game to raise money for the youth charity.

The Bradford-based AM100 car retail group, which has been a patron of The Prince’s Trust for the last three years, has launched ‘Petrol Head to Head’, a free-to-play game that tests users’ knowledge of high performance motoring by comparing supercars and their performance statistics, in a Top Trumps style.

JCT600’s customer experience director, Andy Bateman, said: “Petrol Head to Head has been designed to be engaging and addictive, bringing out the car nerd in all of us.

“It’s insanely addictive - people want to keep playing, they want to beat their friends’ scores and prove their knowledge. We think that kind of engagement is a great way to raise awareness for the Prince’s Trust and encourage people to donate to this fantastic charity.”

Users are shown pairs of supercars and have just 60 seconds to guess the models with the highest top speed, lowest weight, highest BHP and fastest 0-60 time.

Users can donate to the Prince’s Trust via the in-game link, and, if making a donation of £2 or more, they will be entered into a prize draw for a series 3 Apple Watch.

The winner will be announced on December 1, 2018. Users sharing the game and the associated hashtag #clevertorque on social media stand a higher chance of winning

“The Trust does tremendous work around the country, helping young people with education and training, a vision we support through our own apprenticeships and placements as well as the commitment of the JCT600 team to providing mentoring and fundraising,” said Bateman.

The Trust believes that every young person should have the chance to succeed and helps 13 to 30 year olds who are unemployed or struggling at school to transform their lives.

JCT600’s support for the charity includes providing opportunities for colleagues to work with young people through The Trust, providing coaching and mentoring support.