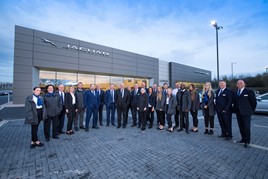 The development of the new multi-million-pound dealership follows the closure of the nearby Lookers Jaguar site in Amersham, Lookers Land Rover in Chipperfield, as well as Stratstone Land Rover Aylesbury.

A statement issued by the AM100’s 2nd ranked car retail group said that over 100 staff from the sites had recently transferred to the new dual branded development.

AM revealed details of Lookers’ plans for the new JLR development back in June.

Among the many changes for JLR in Buckinghamshire is the appointment of Jeremy Hutton as the centre’s new head of business.

Commenting on the opening of the newly-created site, Hutton said: “We’re immensely proud of our new dual-branded retail centre here in Aston Clinton, which has become the main dealer for both Jaguar and Land Rover in the Buckinghamshire area.

“The building truly is amazing and sets the bar for how a modern motor retailer should look and feel. It’s a testament to everyone involved and reflects the high levels of design and engineering that Jaguar and Land Rover set themselves as brands.

“Our staff couldn’t wait to start work in their new home, as well as welcome our loyal customers through its doors.

“Everyone, from staff to customers and those in the surrounding community have been hugely impressed by what we’ve been able to achieve.”

Customers at Lookers’ new Aylesbury facility are now able to browse 18 new car models split between the two brands, while there is also space for over 100 used cars outside, the “biggest selection for JLR in the UK”, according to a statement issued today (December 4).

Visiting customers will also have the use of 30 parking spaces while a combined workshop including over 30 bays will cater for visitors’ aftersales needs.

Earlier this year AM exclusively reported on that JLR had eased off on some of its corporate identity (CI) demands in certain locations as it attempts to drive the completion of the Arch Concept project.

Every JLR franchisee should have adopted the new CI at their dealership facilities by the end of 2018 under the plan’s “aggressive” original schedule.

JLR’s UK Managing director, Rawdon Glover, confirmed that the previous requirement in some territories for a 7x9 Dual Arch showroom (space for seven Jaguars and nine Land Rovers) had halved to 4x4 (four of each), citing pressure on dealer margins and the potential changes to retail dynamics for the changed terms.